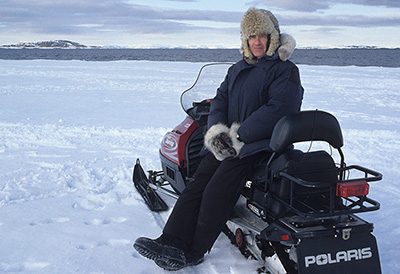 Nick Newbery lived in Nunavut from 1976 to 2005, teaching in Taloyoak, Pangnirtung, Qikiqtarjuaq and Iqaluit. He visited all Nunavut communities during his time in the North and often used his summers to explore harder-to-reach places in the territory. His photographs, poetry and articles, all relating to Nunavut, appeared in calendars, postcards, posters and magazines throughout Canada and beyond. In collaboration with The Royal Canadian Legion, Branch 168, Iqaluit he produced three trilingual coffee table books using some of his pictures of the Eastern Arctic (1995, 1999, 2009). In 2005 he and his wife Terry moved to Nova Scotia, enabling him to teach university courses, to give public lectures and to write about Nunavut and its people.

All photographs in this collection were initially shot in 35mm slide format, using a Pentax K1000 from 1975-1995 and a Canon EOSII from 1995 on. The collection has been pared down to about 3500 digitised images, the original slides and two sets of black & white pictures. They place emphasis on Inuit and their way of life, traditional, transitional and modern, and were taken in a variety of northern communities. He was present at two historic events in Nunavut’s history; at the signing of the Nunavut Land Claim Agreement in 1993 and at the Creation of Nunavut in Iqaluit in 1999 when he was the photographer for the Government of Nunavut. The images on this website are grouped into 10 sections, nine in colour and one in black & white. With every photograph an attempt has been made to identify the individuals, the place and the year.

Nick had no formal training in photography. He simply enjoyed taking pictures in a place that was unique and which held so many contrasts, from glaciers to flowers, from hunting scenes to children playing. He sensed the rapid changes that were happening and wanted to record a culture which he found fascinating, a land which intrigued him and a people whom he respected and who made him feel welcome. The photographs are not always as crisp as those that digital cameras can now offer but they are presented as a forty-year record of Inuit during a critical time of change in their history.

A large number of the pictures were taken in the Qikiqtaaluk region so this is neither a comprehensive nor an evenly distributed portrait of Nunavut. It is simply a snapshot of a time, a record of the travels of one person over roughly four decades. Nunavummiut were always generous in allowing him to photograph them and their world. The creation of this website and making the pictures available to the public is an attempt to thank Inuit for their generosity and to provide an accurate albeit limited historic record for the archives of the Government of Nunavut.